I love it – the headline was ‘Flying Dutchman’ as RVP scores the equalising (diving header) goal against Spain in the their first World Cup match. Was it the trigger for an unbelievable second half performance by the Dutch, scoring 4 goals without reply are the simple stats but it was like  a skilled butcher dissecting a lamb. If this is the standard to match then England have a mountain to climb – I’d love them to do it but…..  ….. 24 hours later and we know the answer.

Ironically the headline of ‘Promised So Much But Failed To Deliver’ could apply to both football team and the rugby.  Needing to win the 2nd test in NZ to keep the series alive England approached half-time with a 10-3 lead and Manu Tuilagi screaming down the touch-line with just one man to beat – Smith. Such a common name but such a unique talent, not only did he stop the try but turned it into a NZ attack that resulted in 3 points.  10 – 6 to England instead of 17 -3. Huge, and NZ came out pumped up for the second half and soon generated a match winning gap. England refused to give up and closed towards the end.

The footballers failed to take their chances, of which there were many, and failed to snuff out the threat down their left-hand side, which was constant. What surprises me most is how these professional footballers seem unable to go 90 minutes in the heat.  Perhaps they should trade in their Bentleys for bikes – push bikes! There is still hope that we can get out of the group – just beat Uruguay and Costa Rica easy ……………. !

Good to see another European victory on US soil – Martin Kaymer comprehensively outplayed the rest of the field at Pinehurst No. 2 in the US Open Golf tournament. Perhaps we also witnessed the ‘birth’ of another British superstar – the young amateur Matt Fitzpatrick who had a final round of 69, one of only 11 under par. Today he heads to Ireland as a professional – I hope he has a great career.

Not something I thought I would ever do but on Tuesday I was honoured to be invited to a Garden Party at Buckingham Palace – along with a few thousand others! Not sure who all of the Royal party were but the Queen, Prince Philip (on his 93rd birthday) and Kate were the star turns.  We were organised in ‘avenues’ so that they could walk between the crowd.  Tea was a couple of crustless sandwiches – yes there was a cucumber one, with mint – and small pastries. Whilst the food was as expected I was a little disappointed with the gardens – apart from the huge lawn the planted areas were nothing special , but then again I’m not the greatest gardener.

The grumpy old man in me had to have a moan about the ladies outfits – a large number of old-fashioned big prints on view, still at least the charity shops will have made a few quid!

Do you believe in coincidences? Eating lunch in the St James Theatre restaurant we discovered that the people sitting next to us were also going to the party (not that surprising) but they were from Ipswich too – Westerfield Road. 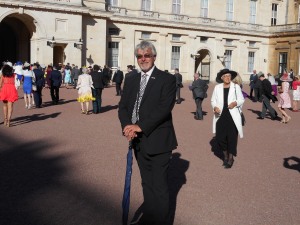 Forever the optimist – was I the only one with an umbrella?

Not a great start to the weekend with Andy Murray being crushed by Nadal. After a very strange quarter final, where Andy let a 2 set lead slip in dramatic fashion only to find a new lease of … Continue reading →

We are extremely lucky to have enough footpaths in a relatively small area to create a ‘fest’ in the first place.   On Sunday I spent a couple of  hours in Copdock & Washbrook trying to find pictures of various animals on signposts!  What a lovely day it was too.  However the turnout was pretty disappointing – just a dozen souls including a couple of children who ‘dragged’ their mum round the whole circuit in order to win the England football and supporters’ pack.

Interestingly the Parish produce a ‘Welcome Pack’ for new people to the parish.  Amongst the items in it is a footpath map and book – if you have a half day to spend you could try to get round all of the paths – the animal  pictures have been left on the sign posts. 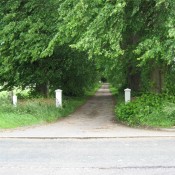 Since the SCC Highways Management team have moved in with Kier in Phoenix House it seems that the left hand does not know what the right hand is doing.

In Endeavour House the Highways Network Improvement team are desperately trying to find a good enough reason to replace the ‘Beagle Roundabout’ with traffic lights at a cost of £125,000.  Supposedly this will reduce the chance of accidents – though there have only been a handful of minor ones in the last 5 years – and improve the flow of traffic along the A1071 for the couple of rush hours.   So what is wrong with this hypothesis?  At rush hour the build up of traffic will only be eased by sorting out the junction with Hadleigh Road through a left filter and changing the phasing of the lights at the Holiday Inn which do not let enough vehicles out from the A1071.  Then there is the future proposed development behind the Holiday Inn – shouldn’t the exits from this site be built into any solution, especially as there could be some 300 houses and 70 businesses on the site.

On the other hand the Highways Management team in Phoenix House want to take down and not replace street lights on a stretch of the old London Road in Washbrook.  This will pitch into darkness a junction where there has been 2 cyclists killed in the last couple of years and at least 2 vehicles (one an ambulance!) have been caught going the wrong way up the dual carriageway.  The schoolchildren have to cross this road to get to their bus, the residents have to cross it to get to the community hall.  There is a hotel with function suite and a number of businesses in the area.  There is a school and a garage.  Ah but the road isn’t used any more they say – try saying that to the residents when there is a build up of traffic on the A12.

So whilst the right hand wants to waste money on a flawed scheme the left hand can’t find any to retain a semblance of safety.

But what are your views on:

a) replacing the roundabout at The Beagle with traffic lights;

b) removing the street lights on the old London Road from the Cameo Hotel to the Tesco underpass?

Fantastic building, great facilities and courses, great teachers and students but why-oh-why do we ignore residents’ fears at the outset and then have no solution when they come to pass? From the very first meeting the residents were raising the issue of student parking – where were they going to park.  Not enough money in the project budget apparently, anyway “we have a green travel plan so only a handful will use their cars”!  Really?

Angry residents publicised their plight in the Ipswich Star.  Numerous surveys have been done and proposals are close to being presented to residents of Pinewood and Sprites.

On Tuesday I walked round the impacted streets with Steve & Chris from Highways to firm up on the amount of yellow paint we are going to need.  I wonder if Del Boy has any of that luminous tunnel paint left?!

Not a solution we will be looking at!